Moments that make you wonder…

I’d never heard of the university. It had an odd name, and I thought the request for my client to speak there was something that would fade away. An interesting gentleman who kept calling and emailing our offices, however, had other plans. He persisted, worked his contacts, and in time, the date was scheduled and our flights were booked.

That week, Gonzaga University would make the cut for the playoffs in the Final Four. As I packed my luggage for our trip the next morning, I was able to watch the very game that the Zags would not only win, but that would send them to Phoenix. It was exciting.

This was all happening during March Madness. And it was historic. Since opening their doors in 1887, Gonzaga U had never had a national championship. It was a miraculous time for them, to say the least.

Once on their campus, I enjoyed absorbing the environment that had produced this stellar team and student body.”Why would I have the privilege of being a part of this amazing week for them?”  And too…”What is God doing or thinking when moments like these, so serendipitous, occur?” I knew I would jot down my thoughts as soon as my schedule calmed down.

Upon returning home, I was able to watch them win again. This game now sending them into the Final Two. As we had received some lovely “swag” from the university upon our arrival, I could now cheer them on in style.

Earlier that morning, the lawn service had come to the house. I had randomly googled, then called, a company the day I returned home from my trip. They said they could come on Saturday as they would actually be in my area. Imagine my surprise when after finishing my yard, they also mowed the house two doors down to my right, and then another house two doors down to my left before heading off to their next rounds. Ironic? Serendipity again? I think not.

I am truly amazed at those moments where God intervenes quietly, and I have no idea how or why. But I just know that He did “it” or handled something for me. Not because I was a good girl that week, but simply because He chose to show His power—and I may never know the answer as to the “why?”

One thing I do know, it’s an opportunity to be reminded of how big He is, how indiscernible He is, and to simply offer gratitude and thanks. 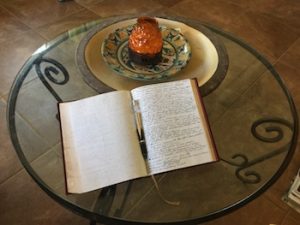 If you experience a “God” moment this week similar to what I have described above, why not write it down? Make note of it. And if you can, continue to make note of those moments in the coming days. I have a lovely journal that I simply jot a line in when those moments occur.  I try to write down at least one or two each morning. I list those things that I know only God could have orchestrated. And to simply give thanks. It’s a wonderful way to start the day. Just so you know, I call it my Book of Gratitude. I hope you will consider starting one of your own. Even if it’s a google doc on your cell phone. 🙂

Want to receive these to your inbox? Just click here.

This site uses Akismet to reduce spam. Learn how your comment data is processed.