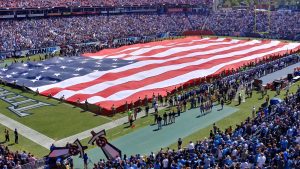 I have had the privilege recently to become friends with some precious families. Mostly the gals, and, of course—the adorable kiddos. The husbands’ day job? Well, you know how it goes…”I’d tell ya’, but I’d have to kill ya,'” kinda thing. Sounds dramatic, but as I get to know these women, it’s dead serious. You keep your mouth shut about those things.

It’s been an honor to be a part of their semi-inner sanctum. For them to invite a “civi” (civilian) like me to even “come to the table,” if you will, means more to me than they can know. You have to understand, I can’t even get through the song when Lee Greenwood sings I’m Proud to Be An American and I cry at the Star Spangled Banner as well.

Ironically, the first Titans game that I had the pleasure of attending this year featured the very group of this band of brothers as the team that rolled out the huge American flag on the field during the National Anthem portion of the game. (A tradition in our country that is quite in the news and under fire of late due to NFL players “taking a knee” during that special tribute time.) 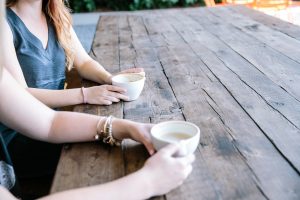 Ladies of Leisure? Ummmmm, no.

But back to the women. These gals say goodbye to their husbands, and many times have no clue where he will land. Today, they can text and communicate while they are at opposite ends of the world, but still, when you are left for months with small children, a house to maintain, the bills, two pit bulls, a ferret, and a snake (all named after famous Americans by the way—you can’t make this stuff up—so SF!) …it’s just as tough a job as that of the boys who are managing somewhere in an undisclosed location.

One of my sweet friends, whose husband is stateside long enough to leave her with child each time before he deploys, recently miscarried. He was not able to be there with her through this part of life’s journey. Life goes on. Tough. 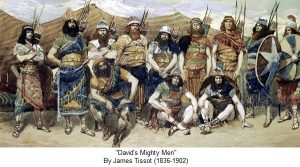 These guys and their “occupation” aren’t actually new. The equipment and technology may be, but the elite warriors have been around for centuries. Many folks may not know that the Bible actually records one amazingly spectacular special forces team of its own. In case you missed it, David’s mighty men (known simply as The 30) were more than 007 for their time, and they were notorious enough to make the Holy Scriptures. And, as we all well know—that is some pretty prime real estate.

So, I leave you today with a few thoughts:

Just my thoughts on this early fall day.

Want to receive these to your inbox? Just click here.

This site uses Akismet to reduce spam. Learn how your comment data is processed.